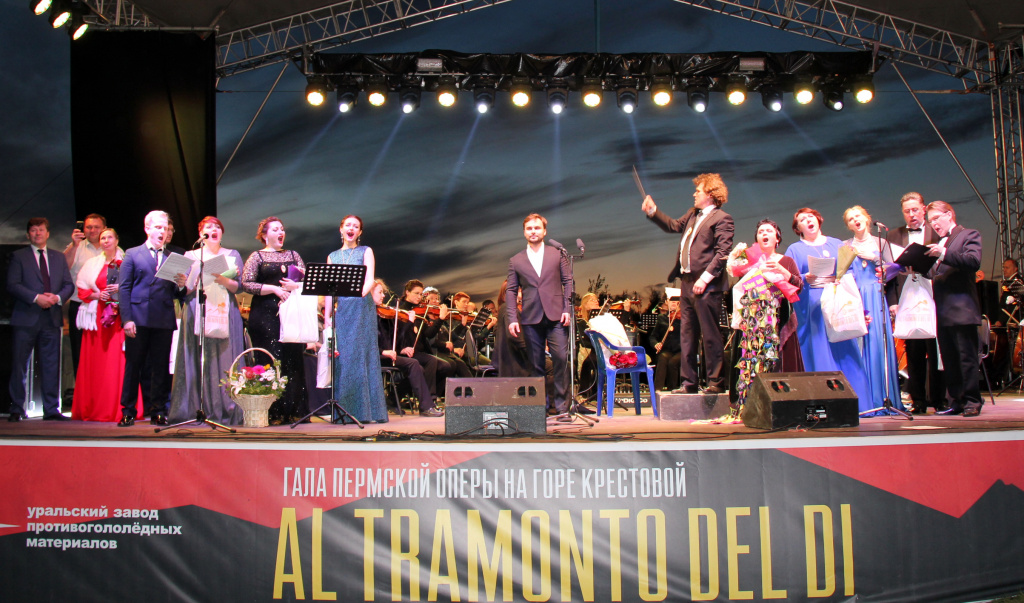 A festival named “Secrets of Krestovaya Mountain” (“Tainy Gory Krestovoy”) has been held in Gubakha on 23 June and completed with a concert titled “Al tramonto del di” (“At the decline of the day”) featuring performances of the Perm Opera and Ballet Theater soloists. The event’s repertoire included extracts from musical pieces by Mozart, Puccini, Verdi, Tchaikovsky and other composers.

The fest gathered an audience from Gubakha, other Prikamye cities and neighboring regions. Notably, it was visited by Johannes Aigner, the Ambassador Extraordinary and Plenipotentiary of the Republic of Austria to Russia. This year the Ural Plant of Deicing Materials (UZPM) has become the projects’ Gala Sponsor.

“Secrets of Krestovaya Mountain Fest is a truly unique gathering where the beauty of Ural nature acts as a catalyst for the spectator’s immersion in the theatrical action. Participation in organizing of this event means that the company is contributing to a veritable feast for Gubakha and the entire Perm Krai, to a kaleidoscope of activities working for the growth of the whole Prikamye region. We are proud that UZPM has an annual opportunity to help implement the project which has become a good tradition.”

Throughout the years, the project’s leitmotif has been the theme of love, the journalists learned from Armen Garslyan, co-founder of the fest, organizing committee member, Chairman of PJSC Metafrax Board of Directors:

“Love is a constant theme of our fest. This year we took a risk so that you would be able to hear the fascinating arias performed by the leading artists of the Perm Opera and Ballet Theatre. We are very encouraged by the spectators’ interest and aspire to surprise them. We are also happy to witness our geobrand develop. Year on year we are manifesting the boisterous current of life that flows in the Russia’s inner land, showing that there is high art, there are strong factories. Thanks to the fest and its audience which takes time to come and see the “Krestovaya decline of the day”, Gubakha has built a spacious hotel; roads are under construction; restaurants and cafeteria are opening. Everything is interconnected, and everything is helping each other grow".

Before the event’s start, the fest organizers invited the partners on the stage to express gratitude for support. General Director of the Ural Plant of Deicing Materials Dmitry Pylev was presented with a diploma.

The Theater’s opera company director Medea Yasonidi says that an open air concert takes more effort to perform: the nature always has its own say in it.

“The artists were nervous, of course, as open air performances are not quite the same as in a theatre. Singing into a microphone has a slight distortion on the sound, and the howling wind becomes yet another concert participant”, she explains.

This year the concert has been visited by some 4-5 thousand people, while the cumulative attendance throughout the years of the fest exceeds 60 thousand. Lubov Zaytseva, the fest’s inventor and art director of “Dominanta” Youth Theater-Studio, says that the project changes year on year, new genres emerge, position of the stage varies based on the program; however, what remains constant is the high level of performance and stagecraft, as the Krestovaya Mountain is visited by the leading creative teams of the Krai.

Tested to the limit
Both to Russia and for export: UZPM is completing two major investment projects
Repair Campaign Started at UZPM
Gost-conforming reagents showcased at innoprom-2022
UZPM supports secrets of krestovaya mountain festival
Delivery of Bionord to Novosibirsk and Launching a Snow Melting Plant