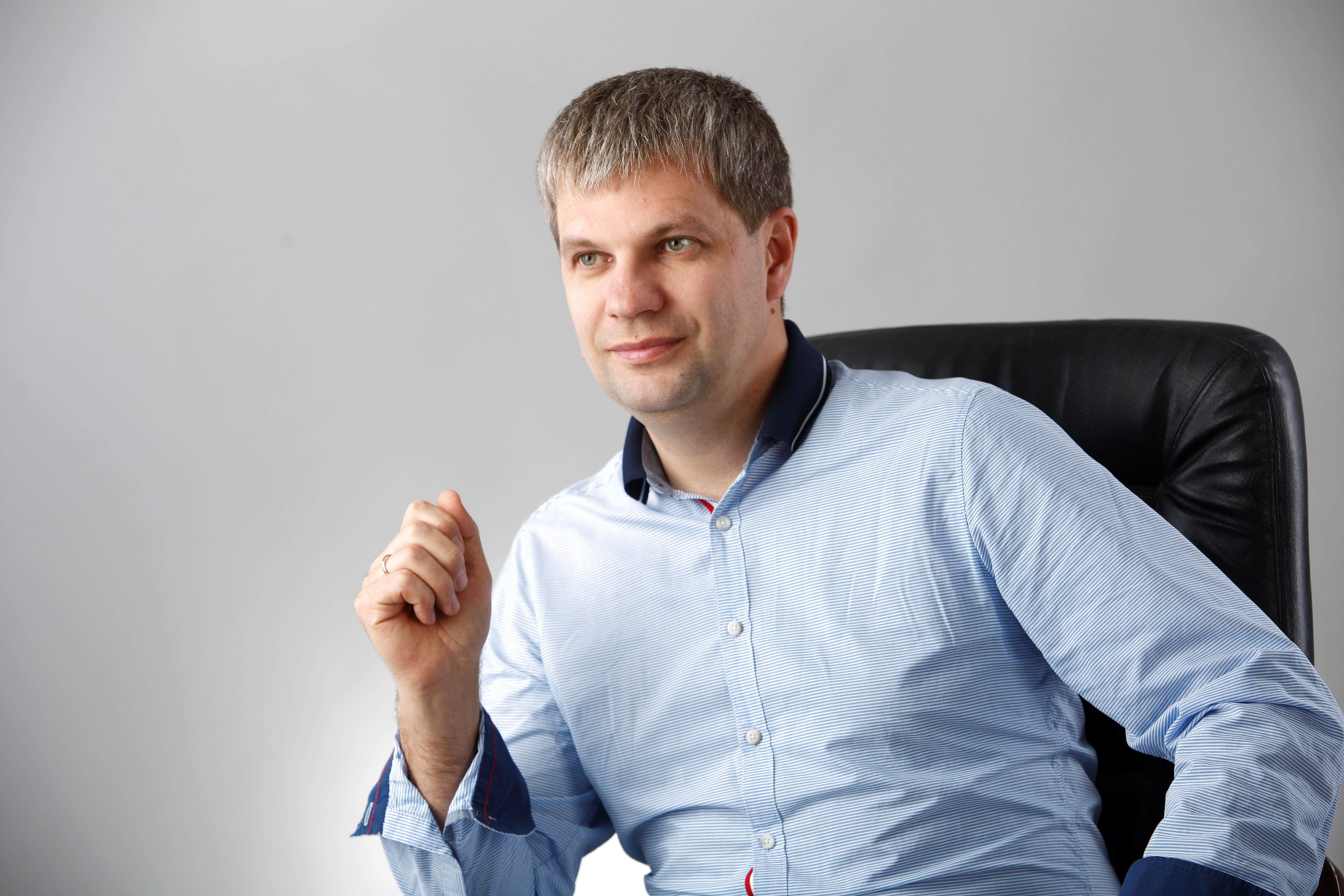 "Judging by the local social media and newspapers, UZPM, and you in particular, have become very active. The plant oversees many social initiatives, strongly invests in infrastructure, you are personally involved in a number of projects, such as the repair of the bridge over the Palta river, and initiate budgeting projects. Why did UZPM suddenly become so socially active, is it related to political interests of the founders or your personal interests?"

"During the election campaign, we tried to communicate our corporate values and fundamentals of the production process to the public. What we were faced with was not just misunderstanding, but accusations of environmental failure. In particular, they accused us of operating oil wells since Soviet times, emitting hydrogen sulphide because of our business activities. Together with environmentalists and members of the public, we have resolved this conflict; moreover, we have taken the leaking wells under control and concluded that Krasnokamsk lacks reliable information about UZPM activities, its corporate and social projects, and an understanding of the deicing material production process. Therefore, it was life itself that posed the task of becoming transparent and active in the media space.

Through the media activity, we have been improving the situation with staff shortage that is now encountered by many enterprises. Now the residents of Krasnokamsk and the surrounding areas are more aware of our production process, can see employment opportunities and career prospects.

As for special projects, such as the bridge, this is more of a personal initiative and an opportunity for the company to help in a matter that is important for the community, including its employees who live nearby."

"You are the Deputy Chairman of the Committee on Industry, Economic Policy and Taxes in the Legislative Assembly of Perm Krai. You participate in analysis of the current situation in the real economy. What is the scale of the disaster caused by the sanctions imposed by unfriendly states?"

"The economic situation is quite difficult indeed. However, I prefer to see the ongoing challenge as a new business opportunity. Let's not forget that business is very adaptive: many of its actors have survived through the 1990s and the 2000s... Executives and owners have experience of managing a crisis, a change in the political agenda, a default, sanctions. Today people tend to promptly make decisions, transform, cooperate, and look for new options and development areas. I am sure that by the end of the year, our economy will have changed structurally; I allow for some temporary budget drawdowns, but I am optimistic because I see the aligned and responsive work of the Ministry of Industry and Trade. In the past few years, entrepreneurs have been working locally without airing their success stories; but now, in the face of the toughest sanctions ever, the overall cooperation movement is taking on a nationwide character and gaining strength. Information databases are being created on raw materials requiring import substitution, along with lists of companies which can manufacture products capable of replacing their European counterparts. There is an ongoing exchange of information, and new supply chains and markets are being built."

"Can we say that the plant in Krasnokamsk occupies a strong position?"

"At UZPM's Krasnokamsk site, our dependence on imported components approaches zero. We have a clear understanding of how to replace imports in the short term. Opening of new production facilities, which we had announced for the first quarter, is brought slightly forward. The projects are 90% completed: commissioning has been suspended because of the departure of German specialists that have been provided by manufacturers of high-tech equipment. An agreement has now been reached with Russian colleagues to complete these investment projects. This year, the new production facilities will be up and running, and thereby, new jobs will be created."

Overall, I do not see any global strategic risks for the plant: environmentally friendly deicing materials will always be in demand to ensure safety on the roads in winter. We are commissioning new capacities that will let us produce and process individual components of our end product, and we are focusing on the domestic consumer, working to reduce production costs, solving inflationary issues with municipal and regional customers, and expanding our line of more cost-effective products. We will be ready to announce the new possibilities and development areas of the plant as soon as in autumn. "

"What are the top priorities for the regional government in Perm Krai posed by the deputy body? "

"We have to admit that we are all out of our comfort zone, the situation is changing on a daily basis. However, doing justice to the authorities, they are constantly online with business. The main objective of today is to support entrepreneurs and manufacturers who have faced structural changes in the economy, to give them time to occupy the niches abandoned by foreigners, to support their activities during the transition period, and to retain their teams.

Perm Krai has already adopted the second package of measures to support small and medium-sized businesses: the tax rate for the simplified taxation system has been reduced to 1% for "income" and to 5% for "income-expenses". These are the minimum possible rates that the Tax Code allows. The list of companies that can benefit from this tax incentive has been expanded to include, in addition to electronic equipment manufacturers, the entrepreneurs engaged in trade and repair of vehicles, retail and wholesale of non-food products, hospitality industry representatives, food and print production companies, and many others. A 50% property tax discount has been introduced for owners of commercial and office property, and the conditions for obtaining a property tax deduction for micro-enterprises have been simplified."

"What economic effect can be expected?"

"It is premature to talk about a quick economic effect. Today, unfortunately, we have no choice but to quench fires as they appear. This approach is heavily criticized by many, but in a rapidly changing world, this is the only way to promptly respond to the new challenges. We are focused on preserving business, and business should preserve jobs."

"In one of your pre-election interviews, you said: 'Many of the problems are difficult to solve without the use of political instruments. You can run from pillar to post in circles, but if there is no political, legislative leverage, the effect will be incomparably weaker. Besides, the status of a deputy helps resolve many issues in Moscow, and promote law-making initiatives at the State Duma level.' You are an industrial manager and now a politician. It is no secret that business interests, and your own, take precedence over public ones. Is there a risk that you will prioritize UZPM?"

"The status of a deputy gives weight in the region, and it really helps to draw attention to the problems that are not being addressed or to bring people together for a socially important project. We don't have to go far to find an example. In December, in the City of Kind Hearts campaign, a member of the Legislative Assembly invited to an event helped Krasnokamsk industrialists unite and hold a real New Year celebration with presents for all children with special needs and from low-income families. The status of the deputy of the Legislative Assembly "authorizes" frequent contacts with the deputy of the State Duma Irina Ivinskikh. Among the problems we escalated to her was the question of expanding the list of subsidized medicines for Perm Krai. Her status helped us address and take control over the issue of including abandoned and leaking wells in the Krasnokamsk City District in the Big Cleanup (Generalnaya Uborka) federal programme.

"Six months in the Legislative Assembly. Is it possible to do a mid-term summary?"

"I would divide my work into legislative work in the committee, public work in the district, and interaction with the decision-making centres in the government. We have daily communication with the chairman of the dedicated committee and many proposals from the district have already been reflected in the support package for small and medium-sized businesses. We have set up a regular public reception office in the district, we have organised monthly receptions for citizens on personal matters. To date, we have held receptions in Krasnokamsk, Mayskoye, Ust-Kachka, Kondratovo, in the public reception office of the United Russia party. Work with the population has been duly arranged, and we plan to set it up in online mode in the future. My team managed to help implement the projects "Krasnokamsk - the Cultural Capital of Prikamye" and projects on initiative budgeting. The plant has financially supported 5 out of 7 submitted projects. Issues of transport, ecology (wells), organisation of fairs for agricultural producers are in our to-do list."

"Will there be a park at Zvezdny?"

"It's only a matter of time. It's a great idea coming from the city government, but it's still in the design stage. Last year, the plant paid for the park’s conceptual design, and UZPM employees removed the garbage and levelled the area. Now the administration needs to get involved in the project by finalising the design, appointing a person responsible for implementation, preparing an estimate, developing a construction plan and securing funding. UZPM alone cannot handle the project. But we are ready to help. I am sure that other industrialists in the city will also join in.

UZPM is a federal enterprise, so we are socially responsible both to Krasnokamsk and the region. We help veteran organisations in the district, support creative initiatives of the Krasnokamsk Cultural and Entertainment Centre and youth projects, support the Krasnaya Zvezda hockey team and develop backyard football, and work with local communities to close pain points in the district."

"With such a busy schedule, how do you find time for family?"

"Without the ability to manage time, you cannot manage yourself. This has been my guiding principle since high school, when I had to combine my studies, extracurriculars and sports training. Today, I advise those under a constant time pressure to use their family time wisely. Have an active, shared holiday. I appreciate it as a credit of trust and respect when children of employees participate in corporate sports and socially important plant activities. Learn to listen to your children, take constant interest in their lives, be open. It helps you earn their love, and they can better accept your values: patience, respect for elders, love for homeland and local motherland, understanding that nobody but us will make our city cleaner, safer, cosier, more comfortable."